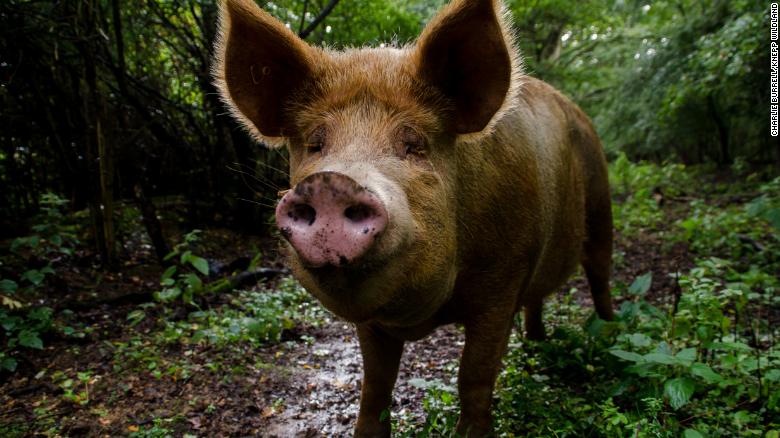 (CNN)During the spring and summer months, the birdsong on Knepp estate is a glorious cacophony of sound.
Walking through the scrubland of this 3,500-acre estate in West Sussex in the south of England, it’s hard to believe the tangled thickets and rugged pastures were once orderly arable fields.
The estate, which includes a 19th century castle, has belonged to the Burrell family for over 200 years. Charlie Burrell inherited it in 1985, when he was just 21.
“I came out of agricultural college incredibly enthusiastic about farming,” he says. “We’d been taught that conventional farming can work.”
But by the late 1990s, with the farm producing low yields and costs rising, the estate was facing serious financial trouble. 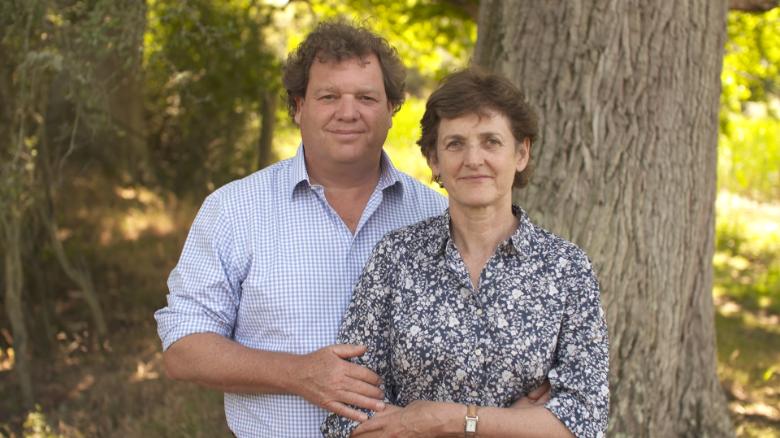 Knepp estate’s owners, Charlie Burrell and Isabella Tree.
Burrell realized that the farm occupied “very poor agricultural land” and was destined never to produce high yields.
“I got to the point when I just felt that I couldn’t go on, because we actually were beginning to lose serious money,” says Burrell. “I needed to change and to change radically.”
Burrell and his wife, Isabella Tree, decided to turn to nature for a solution and in 2001, set about “rewilding” the estate. Knepp is now home to an astonishing array of biodiversity and has become a celebrated conservation success story, attracting many rare species and transforming the landscape from English country farm to untamed wilderness.
“We were living in a biological desert,” says Tree. “Now, ecologists are blown away all the time by just the amount of life here.” 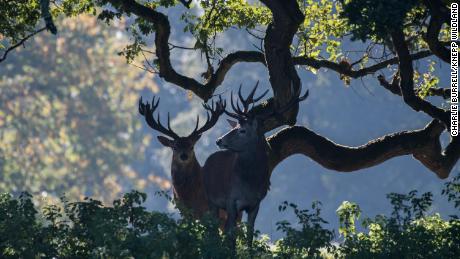 The British farm where the animals rule 03:33

A movement pioneered by American and Dutch conservationists, rewilding aims to restore ecosystems to a natural state, and often involves the reintroduction of native animals. An iconic example is the reintroduction of wolves to Yellowstone Park in the US in 1995, which had a huge impact on the entire ecosystem, boosting beaver populations and increasing vegetation.
Instead of wolves, Knepp introduced Tamworth pigs, Exmoor ponies, longhorn cattle and red, roe and fallow deer — species which are similar to the large mammals that roamed Europe in prehistoric times. Fences were removed from the estate so the animals could wander free, grazing the vegetation, foraging in the undergrowth and spreading seeds and nutrients through their dung and via their fur, helping plant growth and creating new habitats. 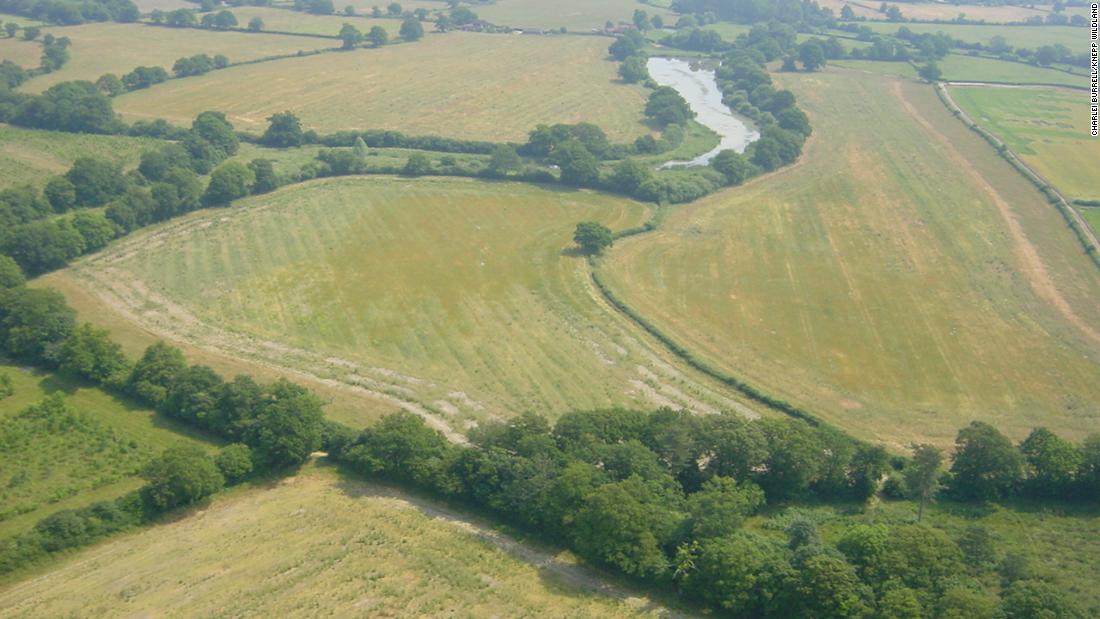 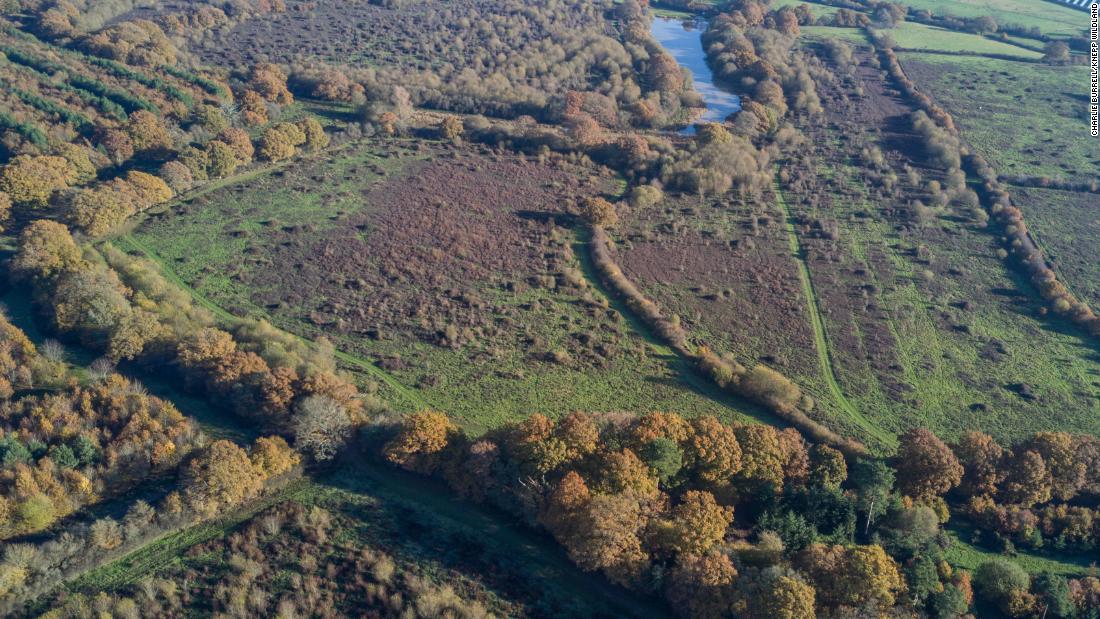 Knepp’s orderly arable fields were transformed into a patchwork of habitats teeming with wildlife.
This created what Burrell calls a “kaleidoscopic landscape” — one that’s constantly changing and is “rocket-fuel” for biodiversity. The estate now has all five UK species of owl and 13 out of the country’s 18 species of bat, including two rare species — Bechstein’s and Barbastelles. The elusive purple emperor butterfly has made its home in the acres of sallow trees — a kind of willow — that flourish on the estate. 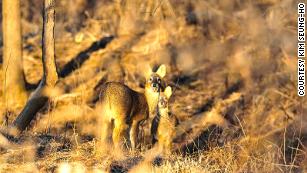 Wildlife is flourishing in these demilitarized zones
Rare birds, including peregrine falcons, nightingales and turtle doves, have also flocked to Knepp.
“We had 120,000 pairs of turtle doves (in the UK) when I was growing up,” says Tree. That number has declined by 98%. “We only have possibly a few thousand left. We’re probably the only piece of land in the UK where turtle dove numbers are actually rising,” she says.
This summer, white stork chicks hatched at Knepp as part of a reintroduction program — the first time in centuries this bird has been born in the UK.
Tree says it’s probably too late to save the turtle dove in the UK, but Knepp’s successes could offer hope to other species.
“It shows the potential that this kind of project has for reversing trends of catastrophic decline,” she says. If this kind of conservation is carried out “on a big enough scale and fast enough, then we could save at least some of the other species from extinction.” 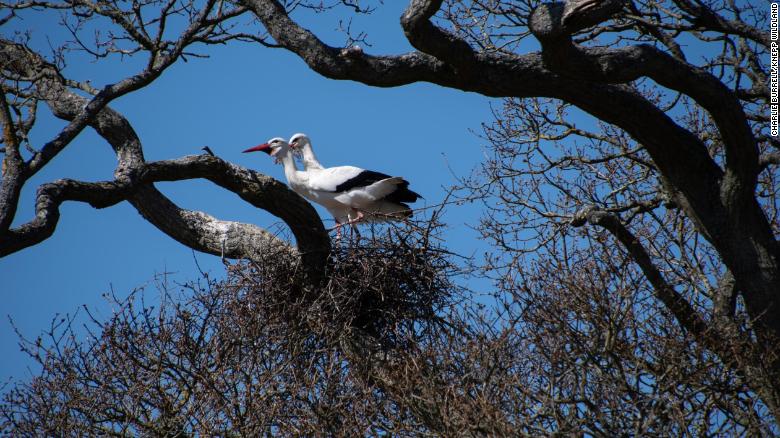 Knepp has attracted many rare birds, including white storks.

Since they rewilded the estate, Burrell and Tree have saved on many of the costs of running a conventional farm, while new revenue streams have helped to turn around Knepp’s finances.
To prevent overgrazing, the numbers of large animals need to be kept in check, providing a steady supply of free-range, organic meat, most of which is sold direct to customers in London.
A glamping business attracts visitors to stay in a collection of cosy shepherd’s huts, yurts and treehouses dotted around Knepp’s wildflower meadows and leafy canopies.
The estate also offers rewilding workshops, photography courses, and guided walking tours and safaris that introduce visitors to the teeming wildlife and generate extra income.
Burrell hopes that Knepp — which is also partly supported by government funding — will inspire other landowners who are considering a more nature-based approach.

Is rewilding a viable option for farmers?

Industrial agriculture is one of the biggest drivers of a devastating loss of biodiversity worldwide. But is rewilding the answer?
Ian Boyd, a former government chief scientific advisor, says the least productive half of UK farmland is responsible for only 20% of the country’s food production.
Boyd explains that less productive land could be used to greater effect to restore biodiversity, lock in carbon and for recreation, and that rewilding is one of various options. 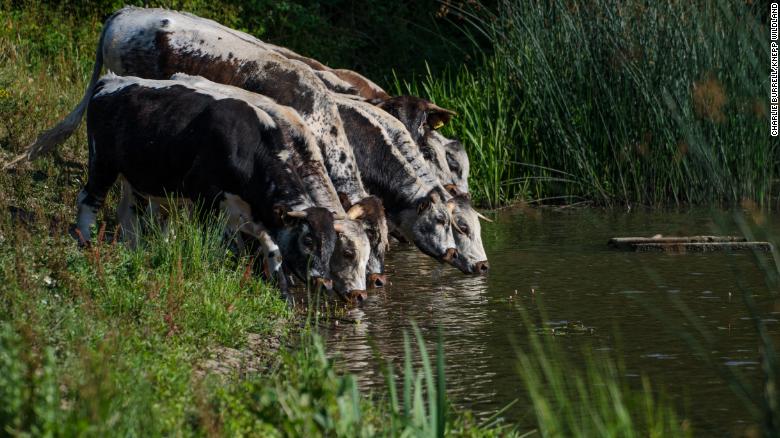 English longhorn cattle drink from one of Knepp’s waterways.
Alistair Driver, director of UK charity Rewilding Britain, agrees that rewilding can be a valuable use of low-productivity farmland.
“Farmers aren’t going to give up, nor should they be expected to give up, highly productive farmland for this purpose,” he says.
Rewilding Britain has called for 5% of the UK to be rewilded by 2100, with a total of 30% designated as conservation-focused, with nature-friendly farming practices and corridors that connect wildlife habitats.
Rewilding is not a threat to food supply, says Driver. “We waste 40% of the food we produce,” he says, adding that reducing waste would address potential food security issues. Boyd says that new technologies, such as vertical farming, could help to make up shortfalls in food production. 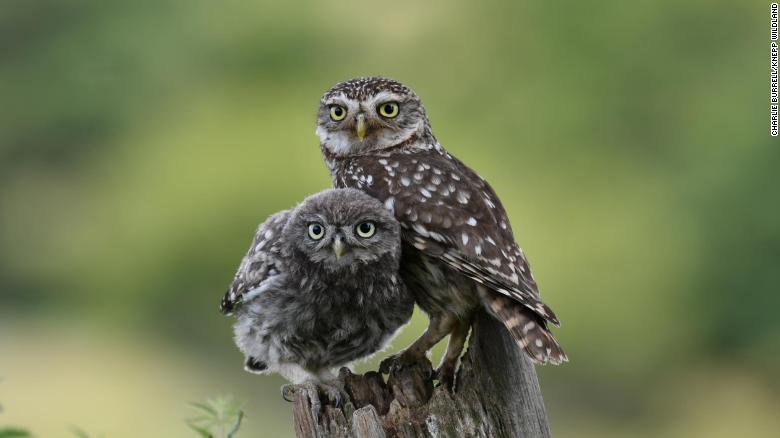 The National Farmers Union has rejected the idea of large-scale rewilding as economically and socially unrealistic but says there are opportunities for integrating some rewilding techniques, like enhancing hedgerows, into traditional farming.

Burrell says he sees an agricultural revolution coming. “There’s a new movement in Britain where we as farmers are collecting together in big groups, sponsored by government, to think about nature.” He says there is hope that the “juggernaut of farming” can be turned away from systems that deplete natural resources.
Born out of necessity, rewilding has been a journey of discovery for the couple — one that Tree says has had a profound psychological impact on them.
“We had known in a very amateurish kind of way that it would be lovely to get biodiversity back, but we hadn’t really understood the impact it would have on us and how it would make us feel,” she says. “It’s just been a complete revelation.