Since the June 2019 launch of The Terraton Initiative, farmers have submitted 10M acres, a significant step forward for agriculture’s role in reversing climate change

Boston, Massachusetts, October 9, 2019 — Indigo Agriculture, a company dedicated to harnessing nature to help farmers sustainably feed the planet, announces that farmers have submitted more than 10M acres of cropland to The Terraton Initiative, a global effort to draw down atmospheric carbon dioxide through agricultural soils. The Terraton Initiative was launched in June 2019 to measure and verify soil carbon, and provide growers incentives to adopt regenerative growing practices that reverse climate change and improve the economic and environmental resiliency of farming. The response, which significantly outpaced company projections, demonstrates the need for new income streams for growers, and a willingness to transition to regenerative practices at scale.

“Farmers, as stewards of the land, are best positioned to harness the potential of soils to act as the most immediate, affordable, and scalable solution to address climate change,” said David Perry, Indigo’s CEO. “If we’re going to ask farmers to change their practices and play a leading role in removing carbon dioxide from the atmosphere, it is reasonable that they are compensated for this effort.”

Regenerative farming practices, such as cover cropping, crop rotations, no-till farming, reduced pesticide and fertilizer use, and integrated livestock management, have been shown to capture atmospheric carbon dioxide through the natural process of photosynthesis. Due to the widespread use of conventional farming techniques today, average soil carbon content is anywhere between 0.5% to 1%; regenerative farming practices have the potential to restore soil carbon to native levels of 3% to 7%. If regenerative farming practices were adopted on the 12B acres of cropland and pastureland across the globe, more than a trillion tons – a teraton – of carbon dioxide could be removed from the atmosphere. This potential is equivalent to the increase in atmospheric carbon dioxide levels since the start of the Industrial Revolution. 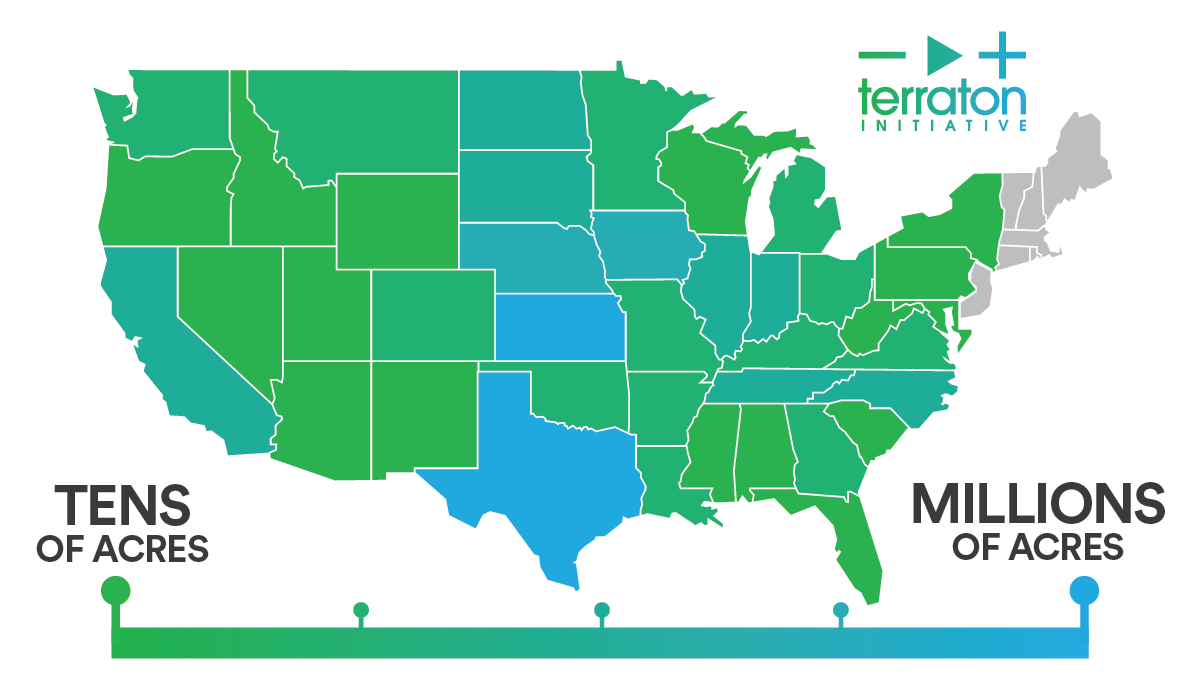 Until now, three main barriers have limited agriculture’s potential to reverse climate change: measuring and verifying soil carbon at scale, grower dependency on chemicals and fertilizers, and lack of adequate financial incentives for growers. The Terraton Initiative, in collaboration with leading technologists, scientists, and growers, addresses these constraints to unlock agriculture as a leading climate solution. Advancements in remote sensing and data sciences allow for the accurate, efficient, and affordable measurement and verification of soil carbon levels. Similarly, discoveries in microbiology and data sciences reduce the need for chemical and fertilizer inputs while maintaining, or even increasing yields. Lastly, The Terraton Initiative offers substantial financial incentives to growers for adopting regenerative farming practices and drawing down carbon dioxide into their soils.

“We joke we’re ‘lazy’ farmers because we use crop rotations to avoid tilling, but in our experience the science and economics support regenerative practices, so we couldn’t find a reason not to enroll,” said Josh Goding, a grower based in Nebraska who submitted his entire acreage to the program. “Misconceptions about agriculture’s impacts on the environment are widespread so, as a farmer, I appreciate what Indigo is doing to quantify and educate others about our work.”

“Our farm has gone through an evolution,” said Loran Steinlage, owner of Iowa-based FLOLO farms. “Our evolution has taken us down the path of what many are calling ‘regenerative.’  Along the way, we’ve learned our farming practices are sequestering carbon and are just now beginning to understand how to measure that. When we changed over to regenerative practices, we experienced healthier soil and higher yields. With Indigo, we’re now being compensated for the added benefit of pulling carbon dioxide out of the atmosphere. It’s a win all the way around.”

Growers who sign up for The Terraton Initiative by the end of 2019 are eligible to receive a minimum of $15 per metric ton of carbon dioxide sequestered in their soils. Individuals, governments, non-profit organizations, and corporations seeking to reverse their carbon footprint can pay enrolled farmers to achieve this status.

Indigo improves grower profitability, environmental sustainability, and consumer health through the use of natural microbiology and digital technologies. The company’s scientific discoveries and digital innovations create new value from soil to sale, benefiting tens of thousands of growers across millions of acres. Working across the supply chain, Indigo is furthering its mission of harnessing nature to help farmers sustainably feed the planet. In 2019, Indigo established The Terraton Initiative, a global effort to drawdown one trillion tons of atmospheric carbon dioxide through agricultural soils. Ranked #1 on CNBC’s Disruptor 50 list, Indigo is is headquartered in Boston, MA, with additional offices in Memphis, TN; Research Triangle Park, NC; Sydney, Australia; Buenos Aires, Argentina; São Paulo, Brazil; and Switzerland. For more information please visit IndigoAg.com, or follow us on Twitter and Instagram.